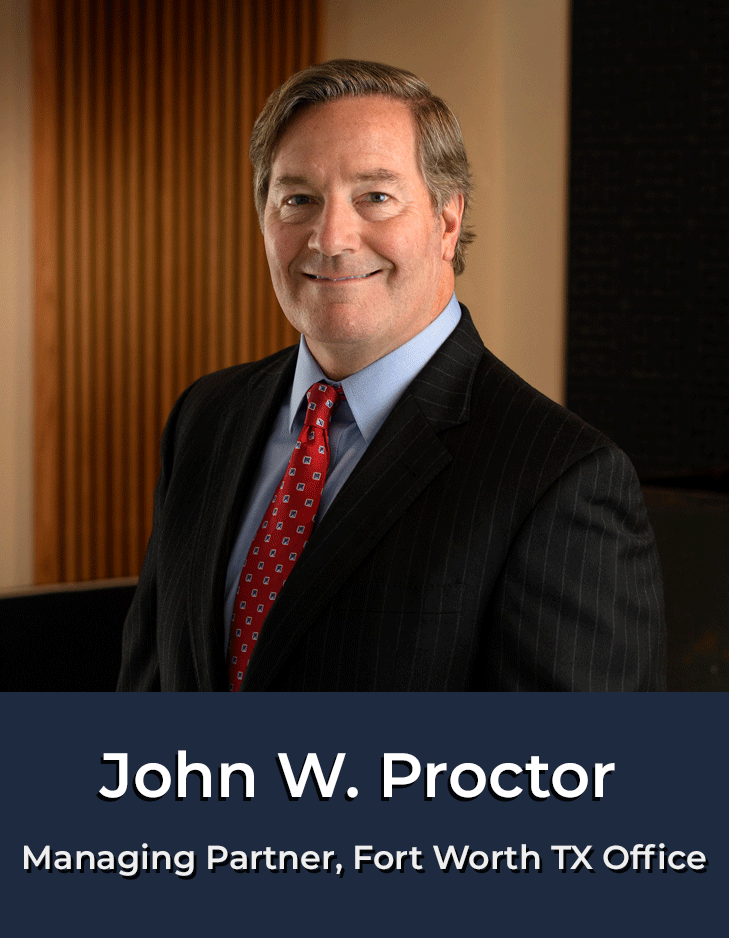 John W. Proctor is the Managing Partner of Brown, Proctor & Howell, LLP. He has more than 35 years of experience in civil trial and personal injury trial law. In addition to representing clients in commercial disputes, Mr. Proctor has been board certified in civil trial law since 1990 and represents railroad and aircraft manufacturers in difficult and often emotionally charged personal injury and wrongful death litigation and consistently obtains successful results for his clients.

Since 2002, he has been listed in the Best Lawyers in America and has been named a Texas Super Lawyer by Thomson Reuters, every year since 2003 when the designation first was created. He has been listed by Best Lawyers in America as the top lawyer in personal injury and railroad defense in the Dallas-Fort Worth area each year since 2014.  He is also a member of the American College of Trial Lawyers.

Mr. Proctor is a member of the Fort Worth chapter of the American Board of Trial Advocates as well as the National Association of Railroad Trial Counsel. He is also a frequent speaker at CLE seminars in Texas and around the U.S. and Canada. 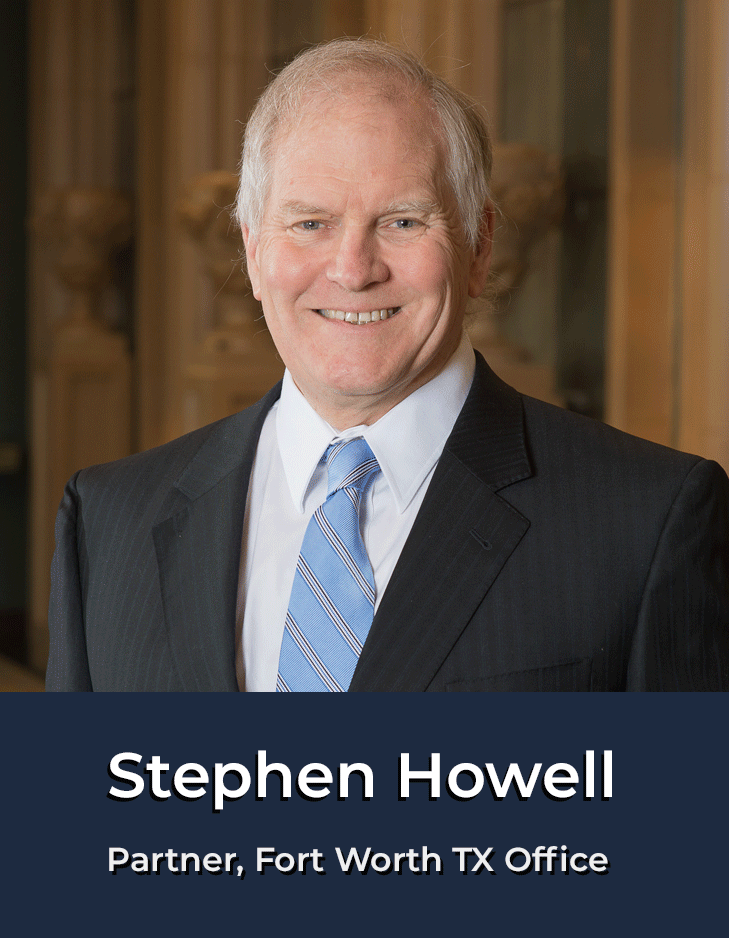 Stephen Howell focuses his practice on aviation litigation, products liability and personal injury litigation. An expert in aviation litigation, Mr. Howell has represented clients all over the country in federal and state court. Honored as a Texas Super Lawyer, by Thomson Rueters, every year from 2006 to date, and Top Attorney, by Fort Worth Texas Magazine, he is also a certified mediator and a member of the Defense Research Institute. 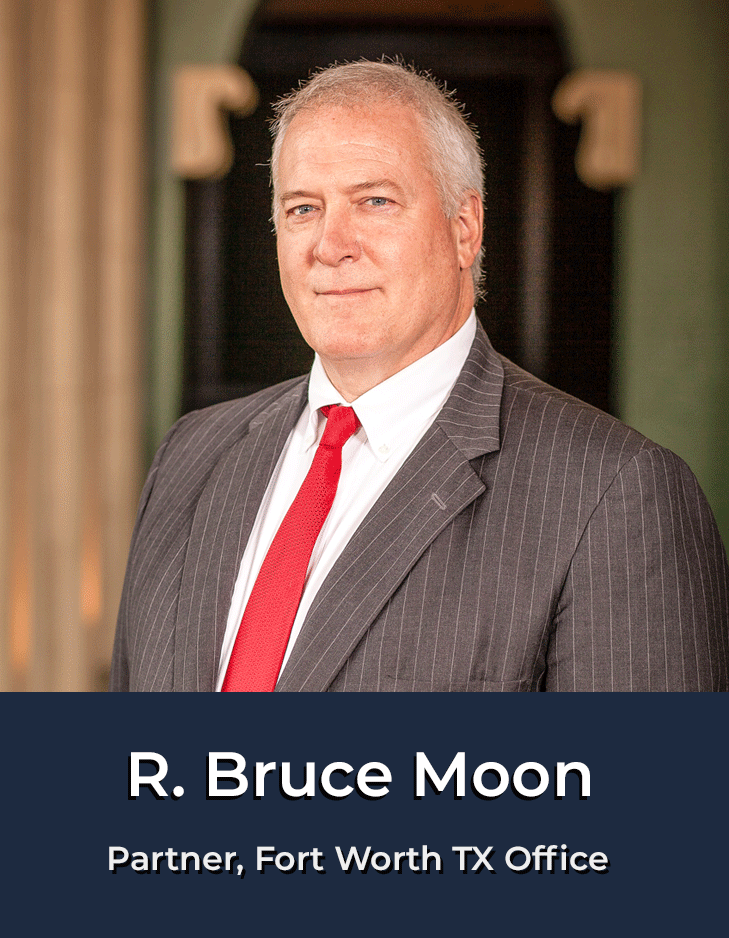 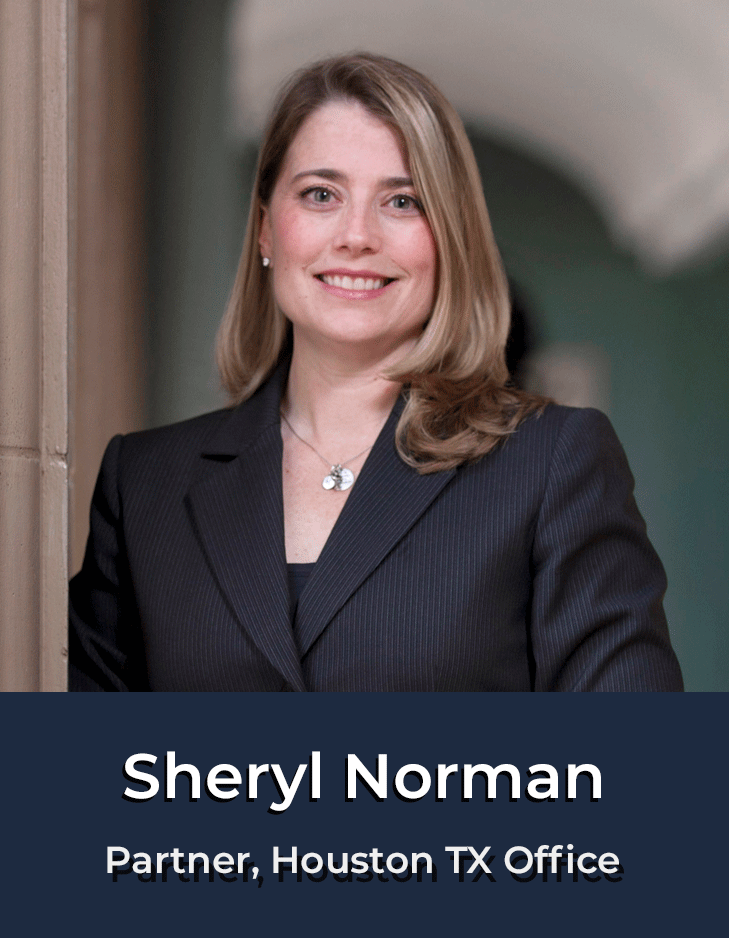 Since 1994 Sheryl Norman has represented Class I railroads, short-line railroads, rail switching companies, rail contractors, and rail employee transportation companies defending grade crossing, FELA and trespasser litigation across Texas.  Her docket primarily consists of lawsuits involving catastrophic injuries such as death, traumatic amputation, brain injury, and paralysis. In addition to representing railroads at the trial and appellate level in state and federal courts she has handled an array of other cases involving personal injury and property damage. She has tried multiple cases to verdict.  Ms. Norman is also a public arbitrator for FINRA.

Ms. Norman is a member of the State Bar of Texas, the Houston Bar Association, and the National Association of Railroad Trial Counsel. She has been named to the College of the State Bar of Texas, an honorary society for lawyers who voluntarily choose to complete at least double the required number of continuing education hours. In 2013 Ms. Norman was elected as a Fellow of the Texas Bar Foundation, the largest charitably funded bar foundation in the nation. Ms. Norman practices primarily out of the firm’s Houston office. 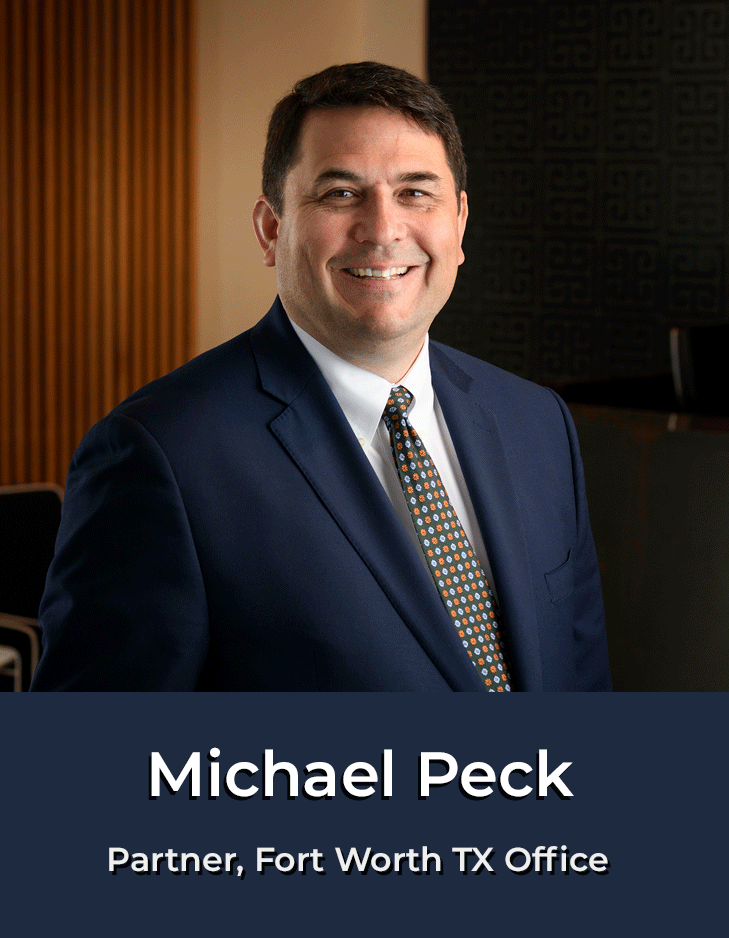 Michael Peck was born and raised in Fort Worth, Texas.  His practice encompasses all areas of civil litigation including trial work, particularly the areas of construction, personal injury, commercial, and transportation.  He has served as first chair trial and appellate counsel in federal and state courts across Texas.  Michael has been active in Fort Worth and has served on the boards of the Bobby Bragan Youth Foundation, the Youth Sports Council of Fort Worth, Ballet Concerto, the Paschal High School Alumni Association, and the Paschal High School Enrichment Foundation.  He is the past president of the Bobby Bragan Youth Foundation, the current president of the Paschal High School Alumni Association, and serves on the steering and selection committees of the Bobby Bragan Collegiate Slugger Award.

Michael has volunteered as a coach for the YMCA and at University Little League.  Michael has consistently been named a Top Attorney in Fort Worth Texas Magazine, as well as a Super Lawyer by Texas Monthly, and a Top Attorney by 360 West Magazine.  He is a Master Emeritus in the Eldon Mahon Inn of Court. 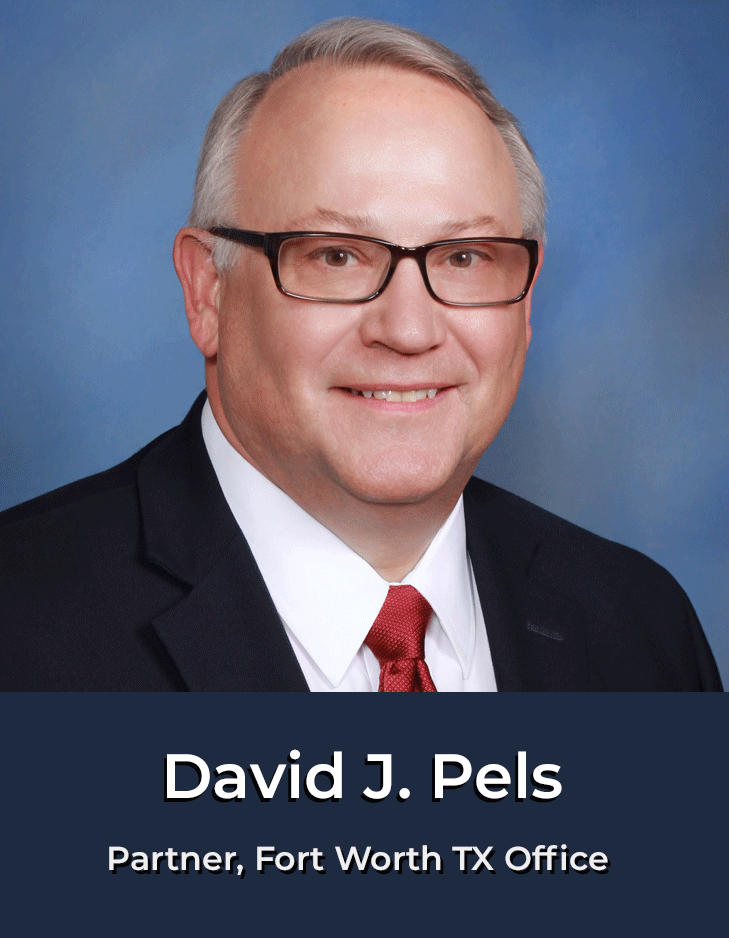 David J. Pels focuses his practice in the areas of business torts and commercial litigation, personal injury litigation and transportation law. Mr. Pels is admitted to practice before the Northern, Southern, Eastern and Western Districts of Texas, the Western District of Oklahoma, the U.S. Court of Appeals for the 5th Circuit and the U.S. Supreme Court. Mr. Pels is licensed in Texas, having graduated from Loyola University School of Law. 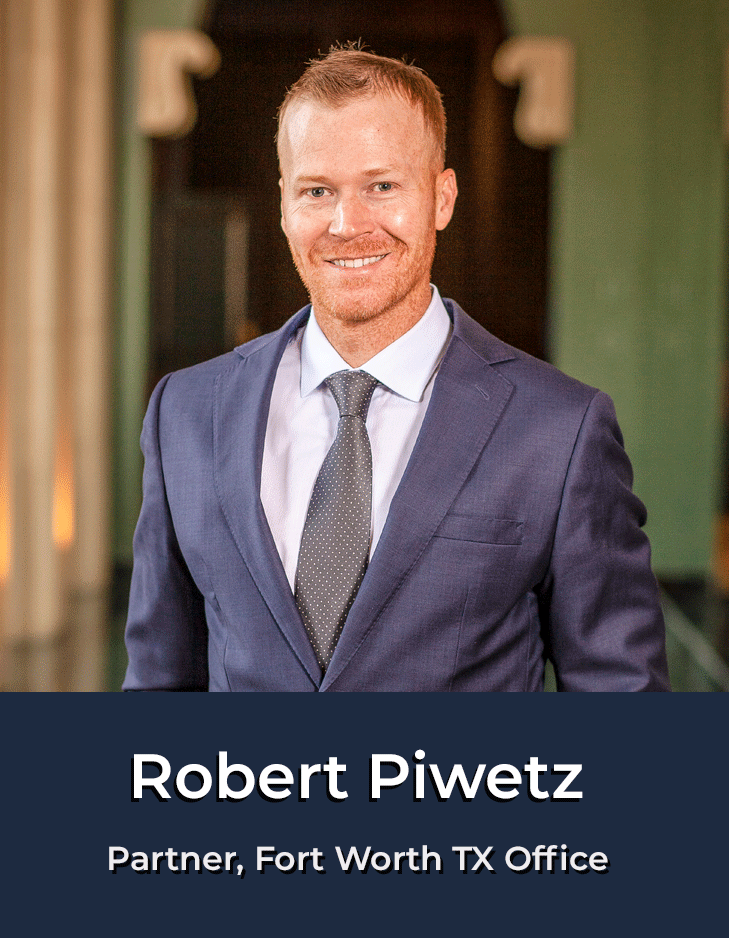 Robert Piwetz has nearly 20 years of experience in civil trial and personal injury trial law. He has successfully tried many cases in state and federal courts, and regularly represents large and small businesses across a wide range of industries, including railroad, aviation, commercial, and real estate.

Outside of work, Mr. Piwetz enjoys spending time with his wife, Laura, and children, Jack and Charlotte. He is an avid runner and volunteers with the arts council and youth sports. 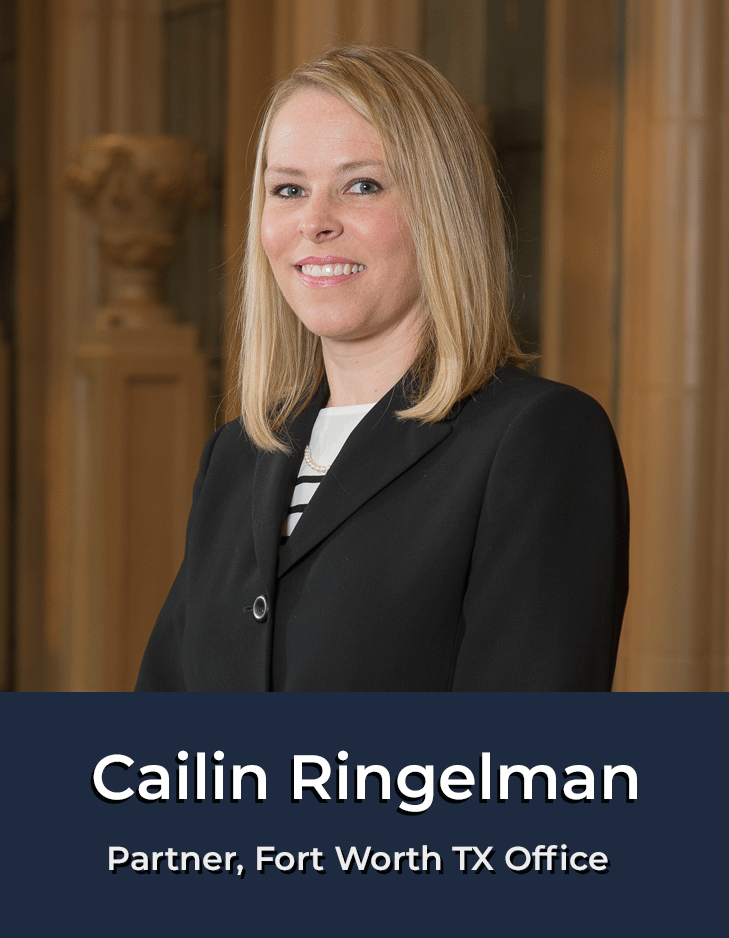 While in law school, Ms. Ringelman served as an Articles Editor for the Washburn Law Journal and was the first recipient of the John D. Ensley Memorial Writing Award. She served on the Washburn Law School Alumni Association Board of Governors from 2008 to 2014. 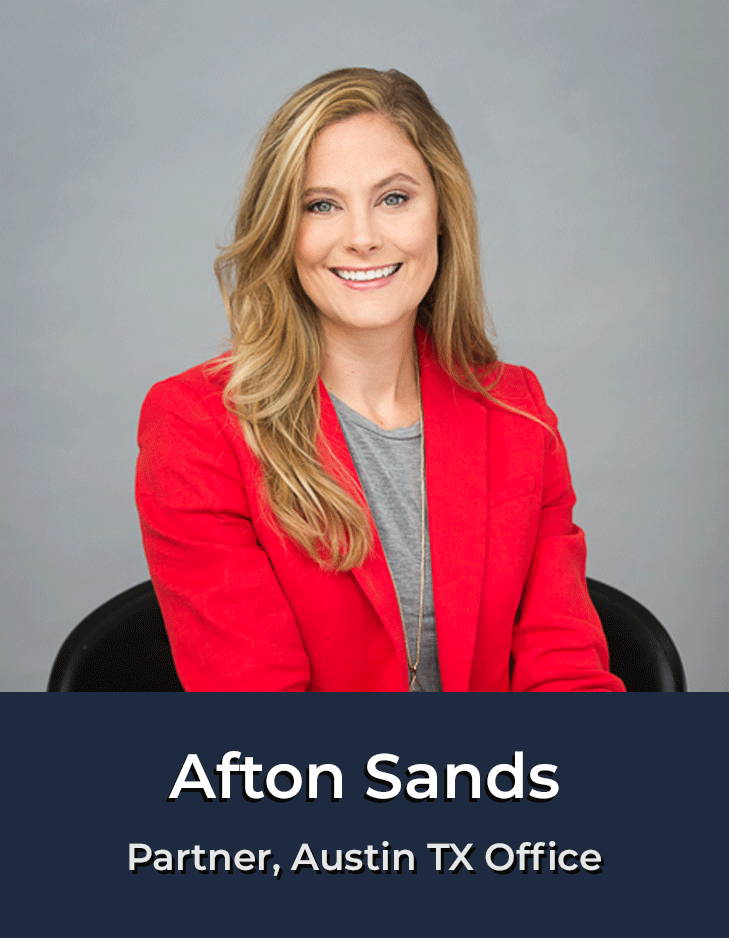 Afton represents clients in state and federal court in a broad range of complex litigation matters. She has extensive experience in commercial litigation handling disputes involving breach of contract, insurance, and fraud. As part of her practice, Afton also represents clients, including railroads, in real estate disputes related to property boundaries, easements, railroad crossings, and homeowners associations. She also defends clients in condemnation proceedings. Afton has represented debtors, creditors, and trustees in bankruptcy court. Before joining the firm, she was a Partner at Husch Blackwell LLP. 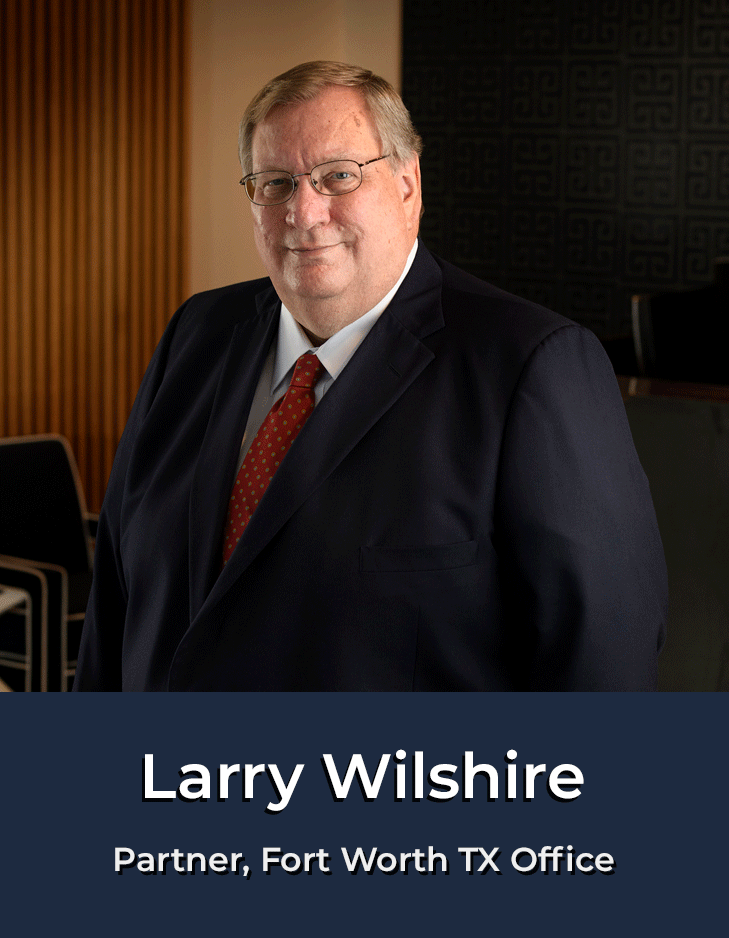 Larry W. Wilshire focuses his practice on litigation and appeals, contracts, business and commercial law, construction law, and housing and urban development. He is currently admitted to practice in Texas, the U.S. District Court for the Northern and Eastern Districts of Texas, U.S. Court of Appeals for the Fifth Circuit and U.S. Supreme Court.

Brown, Proctor & Howell, LLP, a law firm concentrating on highly complex litigation and negotiation, originated in 1922 with the partnership of two prominent north Texas attorneys, Jesse M. Brown and Sidney Samuels.  Today our lawyers handle multi-million dollar cases from our offices in Fort Worth and Houston. For more than 90 years, we have provided clients with the highest level of expertise and professionalism. All named partners are rated as AV Preeminent®, the highest level of professional excellence awarded by their legal peers, as established through the 2012 Martindale Hubbell® Peer Review Ratings.™

This web site is for information purposes only and does not give legal advice or substitute for consulting an attorney. We recommend that you discuss your particular situation with your attorney when you need legal advice. For more information, see our Disclaimer.